Freakonomics: Let’s Get Rid of Tenure 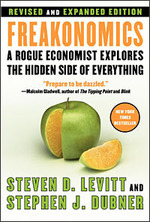 Interesting post on the Freakonomics Blog:  Let’s Just Get Rid of Tenure (Including Mine):

The idea that tenure protects scholars who are doing politically unpopular work strikes me as ludicrous. While I can imagine a situation where this issue might rarely arise, I am hard pressed to think of actual cases where it has been relevant. Tenure does an outstanding job of protecting scholars who do no work or terrible work, but is there anything in economics which is high quality but so controversial it would leave to a scholar being fired? Anyway, that is what markets are for. If one institution fires an academic primarily because they don’t like his or her politics or approach, there will be other schools happy to make the hire. . . . .

Imagine a setting where you care about performance (e.g. a professional football team, or a currency trader). You wouldn’t think of granting tenure. So why do it in academics?

Although I agree with a lot of what Levitt says, I wonder how feasible a non-tenure system would be. If the decision whether to fire a professor were left up to the dean, this would provide far too much power to the dean, especially for institutions like law schools that are mostly run democratically by faculty vote. Another model would be for professors to be fired based on a special vote by the faculty made at a faculty meeting after some kind of review process every 5 or so years. Such a system, however, would create a lot of tension and strife among the faculty. Tenure denials are one of the most contentious and divisive things for a faculty. Creating more tenure strife might poison the school's atmosphere and add institutional drama that distracts professors from their scholarship.

In all the research and debate thus far on the merits of tenure, one aspect of it has not been studied: whether it fulfills its original justification. The key reason for tenure, espoused by the American Association of University Professors since 1915, is to ensure academic freedom — professors' freedom to teach, conduct research, and perform other duties without fear of job loss or censure. Does tenure in fact do what it is supposed to do? ...

Our survey [of 1,004 professors] leads us to conclude that tenure is not living up to its original promise: It does not liberate professors to exercise the freedoms of speech, writing, and action. The muzzling effect of the current system of promotion in higher education — in which even tenured associate professors refrain from exercising academic freedom for fear of derailing their chances for promotion to full professor — must be weighed against tenure's virtues, such as higher graduation rates and the recruitment of a talented work force.

Listed below are links to weblogs that reference Freakonomics: Let’s Get Rid of Tenure:

You can get rid of tenure, but you're not going to see anyone take the risk of writing on genuinely creative topics for a long, long time. More likely, you'll see a lot of Levitt and Dubners: people who make clever, attention-getting observations with little long-term value. Tenure was reduced or eliminated in England and it's hard for me to remember the last time I saw a really major tax piece from that country.