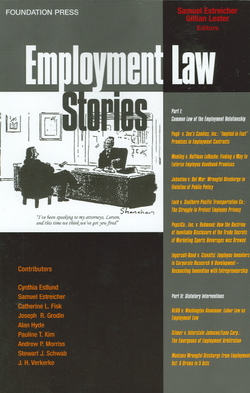 Employment law is fast emerging as a dominant area of practice and concern. This exciting new Law Stories title provides behind-the-scenes descriptions of the landmark cases — the litigants, the lawyers, the strategy — that helped shape this growing field. This is an account of emerging law from the ground up. The objective is to help the student understand that, well before appellate judges are involved, the basic narrative and the doctrinal/policy potential of the case has been set by the decisions of litigants and their representatives. Several chapters are also devoted to the story behind some of the principal statutes in the area.

Other titles in the Law Stories Series (for which I serve as Series Editor) are:

» Employment Law Stories from Workplace Prof Blog
Thanks to Paul Caron over at TaxProf for pointing out to us that Foundation Press has published Employment Law Stories, edited by Samuel Estreicher (NYU) Gillian Lester (UC-Berkeley). Here is a summary of what is included in this newest addition [Read More]