Ave Maria to Move From Michigan to Florida in Fall 2009 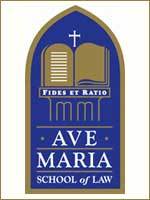 Ave Maria School of law announced yesterday that it will move from its current location in Ann Arbor, Mich., to the town of Ave Maria, Fla., located between Naples and Immokalee in the southwestern part of the state, in Fall 2009.  From the press release:

Te Board of Governors determined that moving to Ave Maria, Fla., will give the Law School its best opportunity to thrive and continue fulfilling its unique mission of educating outstanding lawyers in the context of the Catholic intellectual tradition. ...

Since its inception, the Law School has sought to provide a rigorous legal education characterized by a commitment to justice, academic excellence, and the highest ethical and moral standards, in the context of the Catholic intellectual tradition. Inspired by Pope John Paul II's encyclical Fides et Ratio, Ave Maria offers an education characterized by the harmony of faith and reason.

Prior TaxProf Blog coverage of the controversy generated by the move:

Update:  Brian Leiter notes that "This will no doubt be a relief to the University of Michigan Law School, whose graduates have sometimes passed the Michigan Bar exam at lower rates than graduates of Ava Maria! (Now if we could only get rid of Baylor here in Texas....)."

Listed below are links to weblogs that reference Ave Maria to Move From Michigan to Florida in Fall 2009:

The closing of AMSL Ann Arbor and reestablishing a new school in Florida is not supported by many alumni, students, and faculty. To those of us who oppose it, it represents the height of bad governance and megalomania. See http://www.avewatch.org/files/7ddc50205409630d8d4e0393c217ee10-24.html for details.