After multiple posts (collected here) on the tax consequences of the gift bags given to celebrities at the Oscars, I can't resist the new tax wrinkle posed by Sunday night's show:

Hollywood's wealthy liberals can now avoid any guilt they might feel for consuming so much non-renewable fossil fuel in their private jets, their SUVs, and their multiple air-conditioned mansions. This year's Oscar goodie bag contained gift certificates representing 100,000 pounds of greenhouse gas reductions from TerraPass, which describes itself as a "carbon offset retailer." The 100,000 pounds "are enough to balance out an average year in the life of an Academy Award presenter," a press release from TerraPass asserts. "For example, 100,000 pounds is the total amount of carbon dioxide created by 20,000 miles of driving, 40,000 miles on commercial airlines, 20 hours in a private jet and a large house in Los Angeles. The greenhouse gas reductions will be accomplished through TerraPass' [program] of verified wind energy, cow power [collecting methane from manure] and efficiency projects." Voila, guilt-free consumption! It reminds us of the era when rich Catholics paid the church for "dispensations" that would shorten their terms in Purgatory.

TerraPass has more details on its blog: 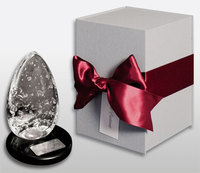 As the value of the gift bags — stuffed with offers of exotic vacations, jewelry, cars, and the like — approached $100,000, the IRS took notice as well.

The Academy decided this year to get rid of the gift bags. They had outlived their usefulness as a means of expressing gratitude — nothing says thank you like a massive tax bill.

This is where TerraPass comes in. Looking for a more restrained token of appreciation in keeping with the spirit of the evening, the Academy decided to give each presenter and performer a year of carbon neutral living. The gift consists of a glass sculpture from designer Simon Pearce and 100,000 lbs of CO2 reductions from TerraPass.

Carter Wood notes that the Academy may have generated a tax problem for itself and for the recipeints since the value of the green replacement for the gift bags may well exceed the $600 information return threshold:

Perhaps the IRS will update its Gift Bag Questions and Answers page to address the tax consequences of the receipt of the sculpture and carbon certificates.

Update:  Adam Stein, a co-founder of TerraPass, comments that the Academy planned around any tax problems:

The Academy was very well aware of the $600 gift limit. The total cost of the sculpture and carbon came to $575 per recipient. As you note, the sculpture retails for $650. You'd have to raise the price to about $785 if you also wanted the full 100,000 lbs of CO2 reductions. This figure is close to what the Academy paid, but is obviously a bit higher. Why the discrepancy? The answer is probably pretty obvious, but you always get a better deal on something when you buy wholesale in bulk. If you're in the market for 100 glass sculptures and 10 million lbs of CO2, please give us a call. I'm sure we can work something out.

No word on how the various stars plan to report the transaction.

Listed below are links to weblogs that reference An Inconvenient Truth: "Green" Replacement for Oscar Gift Bags Poses Tax Problems for Academy and Hollywood Stars:

Better than a lump of real carbon -- coal!

Jim - the $25 limit is for employees, under the obvious logic that a "gift" to an employee is just another word for pay. The limit has to be set low enough to discourage masking regular compensation as "token bonuses", and $25 pretty much makes sure it costs the company more money to distribute the award than could be saved in taxes. The burden on the company and employee is also minimal, as all the necessary paperwork to report the income is being filed anyway.

In this case there is no pre-existing employment, so the rules allow a higher limit before going through the hassle of reporting it as income. By the income standards of the presenters $600 is clearly a token rather than compensation, and it is also clearly a once-a-year (if that) opportunity. If any of the presenters were employees of the Academy as opposed to members, this would certainly be taxable.

$400 offsets that much CO2? Hmmm...since I only have a small house and rarely fly, I should be able to do it for less, and I would guess most other people could as well. How about we just forget about Kyoto et al, defund all the global warming research and send the money to TerraPass?

The $600 threshold is an information reporting requirement for the donor, not a limit on the taxability of the gift. If the value is over $25, it's taxable, whether the recipient receives a 1099 or not. Sorry Hollywood...

Has Adam Stein explained how $575 from Al Gore & friends buys the same amount of carbon cancellation as my $785? If the 36% difference results from lower "transaction costs" associated with bulk purchase, doesn't that imply a fairly high markup by virtue-vendor TerraPass on its "retail" transactions?

None of this is a gift. This is compensation that some are trying to disguise as a gift. Although $600 is the threshold amount for sending a 1099, lesser amounts are still taxable and need to be included on the taxpayer's Schedule C.

I think theirs a difference since their gifts didn't come from an employer/.

but isn't 'value' and not 'cost' the appropriate criteria?

Let's see...30 metric tons? Anyone care to compute how fast Gore goes through that? I calculate that his gas bill alone will use one of those passes up in just under four months.

I'm not a tax lawyer but that goodie bag sure appears to exceed the amount that gets me taxed. My employer has a "Thank you" plan where an employee can nominate another employee for a thank-you award for exceptional assistance, teamwork above and beyone the norm, etc. -- the award allows the selection of a gift from a collection of things like company logo shirts, all of which carry a retail value under $25 because gifts over $25 would be taxable. This Christmas the company provided managers with funding for some activity such as a departmental holiday lunch to thank employees for their hard work in 2006. My department is a virtual department -- employees scattered from coast to coast -- so our manager used the money to give each person a $40 gift card to a national bookstore chain. We have been informed that because it was over the $25 limit, it will count as taxable income. If it applies to people who work for a living, it should apply to these spoiled movie millionaires as well.

How "convenient." The Academy picks up the carbon "tab" for a star's year of high living.

Notice, too, TerraPass's ability to "negotiate" the price of its indulgences, er, "reductions." Oh, to be in the snake oil market!

Plus, isn't the value for tax purposes the fair market value of the individual package, not its pro rata cost basis bought when bought in "bulk"?