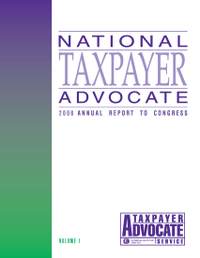 National Taxpayer Advocate Nina E. Olson has released her 2006 Annual Report to Congress, which lists (as required by § 7803(c)(2)(B)(ii)(III)) the twenty most serious problems encountered by taxpayers.  Here are the Top 5:

As explained in more detail below the fold, the report calls on Congress to repeal the IRS's authority to outsource tax collections.

The report raises numerous concerns about the outsourcing of tax collection that began in September 2006. The report notes that one of the premises on which the program was based was a “level playing field” — meaning that rules that apply to the IRS and IRS employees would also apply to private collection agencies (PCAs) and PCA employees. In practice, the program has deviated from this “level playing field,” Olson said. For example, the report notes the procedures that IRS employees follow when collecting tax debts are set forth in the Internal Revenue Manual and are available to the public. By contrast, PCAs maintain operational plans and calling scripts that describe such things as psychological techniques to coax debtors into paying, and these scripts are considered “proprietary information” that Olson’s office was not permitted to disclose. The report’s analysis of the costs and benefits of the private debt collection initiative leads Olson to conclude that the revenue benefits of the program are limited and the potential for taxpayer rights violations is significant. She recommends that Congress repeal the IRS’s authority to outsource tax collection.

Listed below are links to weblogs that reference National Taxpayer Advocate Releases Annual Report; Calls on Congress to Repeal Outsourcing of Tax Collections:

» The Advocate and the AMT from Don't Mess With Taxes
Just in case you haven't gotten around to reading the Taxpayer Advocate's annual report that I mentioned earlier today, and since I promised I'd be back, here's a closer look at this year's top tax trouble: the alternative minimum tax (AMT). National T... [Read More]

My interests in the NTA's Annual Report are different. IRS treatment of currently non-collectible for hardship at Exam level has no paper trail. It's all by phone, and no right to protest, unless collection attempt is made and CDP hearing results, when same exact issue asises.
for same good reasons. In one case, Agent OK'd CNC but over-ridden in part without telling me. Lien filing then is automatic on ALL assets. If lose CDP, no case on abuse of discretion for hardship. Further, no IRS rules for hardship. Even IRManual is little help for standards.