National Jurist: How Far Will Law Schools Go to Win the Rankings Race? 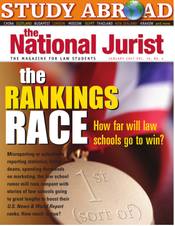 Interesting cover story in the January 2007 National Jurist:  The Rankings Race:  How Far Will Law Schools Go to Win?, by Rebecca Luczycki:

Misreporting or selectively reporting statistics, firing deans, spending thousands on marketing; the law school rumor mill runs rampant with stories of law schools going to great lengths to boost their U.S. News & World Report ranks.  How much is true, and why are schools willing to put it all on the line just to get a few points higher on the list?

The article does not break any new ground; it covers many of the rankings stories previously blogged here, including:

Listed below are links to weblogs that reference National Jurist: How Far Will Law Schools Go to Win the Rankings Race?: