Washington & Lee has updated and expanded its law review rankings, which are based on citations to articles published in the past eight years (1999-2006):

We previously have blogged Al Brophy's interesting work on the relationship between law review citations and law school rankings. Here is a quick comparison of the Top 25 general-interest student-edited law reviews in the updated W&L rankings and their schools' U.S. News ranking: 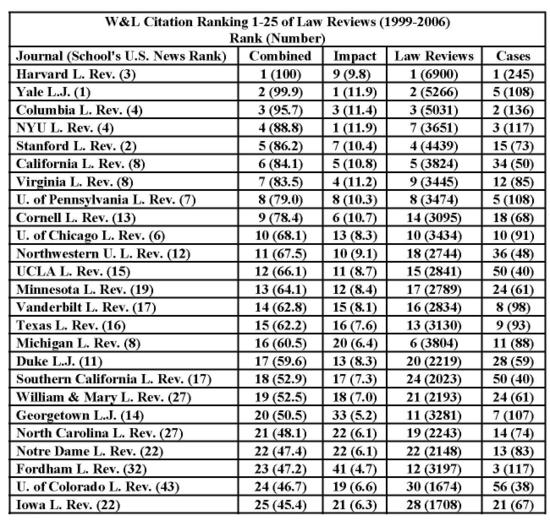 Below the fold are charts on: 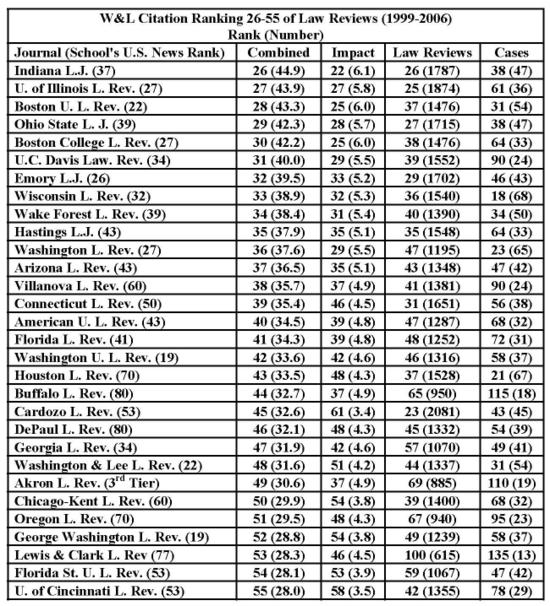 » Law Reviews and Law School Rankings from PrawfsBlawg
Over at TaxProf, Paul Caron has posted a fascinating contrast between the USNews law school rankings and the Washington and Lee library's rankings of law reviews, based on number of citations in law reviews, citations in cases, and impact factor (citat... [Read More]

Well nothing's new here. Ronen Perry has already shown the correlation between law review rankings and law school ranking in his trilogy. By the way, he also came up with the combined ranking method which has been used by W&L.

The University of Colorado will publish Prof. Brophy's most recent analysis of this data in its next issue (78 U. Colo. L. Rev. ___), due out in January. The article is titled, "The Emerging Importance of Law Review Rankings for Law School Rankings, 2003-2007," and is part of a larger section on the current state of law schools.

The other articles in the section are: Remarks of the Honorable Stephen Breyer at the Dedication of the Wolf Law Building; Lorenzo A. Trujillo, "The Relationship between Law Shool and the bar Exam: A Look at Assessment and Student Success;" Kenneth D. Chestek, "MacCrate (in) Action: The Case for Enhancing the Upper-Level Writing Requirement in Law Schools"; and Mark W. Pletcher & Ludovic C. Ghesquire, "In Restraint of Trade: The Judicial Law Clerk Hiring Plan".

The issue will be available on LexisNexis, Westlaw, and HeinOnline. Copies of the issue can be purchased from the Law Review, at http://www.colorado.edu/law/lawreview/subscriptions.htm.
Please let me know if you have further questions.

It stands at #12 in citations overall and #15 in law review citations, only slightly higher with where it usually falls in US News.

It ranks #50 in citations by cases.

Nothing quite like publishing a bunch of useless and impractical articles.