Just Say No: 26 Canadian Universities Opt Out of Rankings 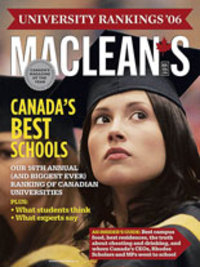 Maclean's Magazine is out with its 2006 University Rankings issue covering 42 Canadian colleges and universities.  The magazine's web site has an interactive feature allowing readers to customize the rankings using 24 variables.

The top comprehensive universities are:

The top medical schools are:

The Chronicle of Higher Education reports that over two dozen schools boycotted the magazine's questionnaire and refused to provide performance-indicator information as they had for the prior 15 years because of concerns over the magazine's methodology.  For more details, see here.

Also this week, the Globe and Mail issued its 2006 University Report Card, a ranking of 49 Canadian colleges and universities based on a survey of 32,700 students.

Listed below are links to weblogs that reference Just Say No: 26 Canadian Universities Opt Out of Rankings:

If only law schools were courageous enough to opt out of rankings. Perhaps then we could end that rag's caustic influence on our educational system and profession.