Interesting editorial in the Weekend Wall Street Journal: Incomes and Politics: Comparing the Current Decade to the Sainted 1990s: 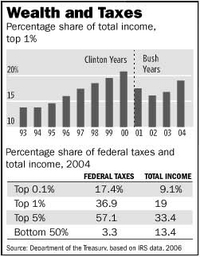 The Treasury Department will soon release the latest IRS data on who paid how much in taxes in America through 2004. We've had an early look at the numbers, and anyone who reads the front pages of our leading dailies may be surprised to learn that the Bush years compare very well by tax and income equality to the sainted Clinton era.

First, the new data show that the bottom 50% of Americans in income--U.S. households with an income below the median of $44,389--paid a smaller share of total income taxes in 2004 (3.3%) than in Bill Clinton's last year in office (3.9%). That 3.3% is the lowest share of total income taxes paid by the bottom half of earners in at least 30 years, and probably ever. The majority of American families with an income below $40,000 pay no income tax at all today, and many of them also get a welfare subsidy from the Earned Income Tax Credit that effectively offsets much of what they pay in payroll taxes.

Especially instructive is what has happened to tax shares since the tax rate on capital gains and dividends was cut to 15% in 2003. These investment tax cuts have corresponded with a huge spike in tax payments by the affluent. Between 2002 and 2004, the income tax share of the top 0.1% of earners rose to 17.4% from 15.4%. A reasonable conclusion is that much of this increase reflects tax payments on capital gains and dividends--which have soared by an astounding 79% and 35%, respectively, since the rate cuts.

Update:  Stuart Levine criticizes the editorial as an attempt "by knaves to fool fools" because it ignores all federal non-income taxes.

Listed below are links to weblogs that reference WSJ: Tax Cuts Increase Progressivity of Tax Code:

But the issue as always is whether the rich are paying more taxes because their effective right is higher or because they simply have more income. Is the WSJ story clear about this? It is often hard to separate them.