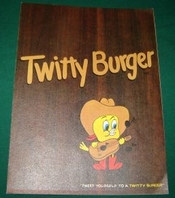 As someone with an extensive collection of tax bric-a-brac, I was crestfallen to hear that I had missed out on the ebay sale of a menu from the defunct Twitty Burger fast-food restaurant chain.  Celebrity tax aficionados will recognize the restaurant from the famous case of Harold L. Jenkins (a/k/a Howard Twitty) v. Commissioner, T.C. Memo. 1983-667.

Twitty convinced 75 of his friends in the country western music business to invest in the restaurant chain with him.  When the business failed, Twitty reimbursed his friends for their losses even though he was under no legal  compulsion to do so.  The Tax Court upheld the claimed business deduction and closed with an "Ode to Howard Twitty," which the Service matched in its nonacquiesence in an "Ode to Howard Twitty:  A Reprise" (A.O.D. 1984-022 (March 23, 1984)).  (Both tax poems are reprinted in full below the fold.)

Joel Newman has an in-depth discussion of the Twitty case in our Tax Stories book in his chapter on Welch v. Helvering, 290 U.S. 111 (1933):  The Use (and Misuse) of the "Ordinary and Necessary" Test for Deducting Business Expenses.

Twitty Burger went belly up
But Conway remained true
He repaid his investors, one and all
It was the moral thing to do.
'His fans would not have liked it
It could have hurt his fame
Had any investors sued him
Like Merle Haggard or Sonny James.
'When it was time to file taxes
Conway thought what he would do
Was deduct those payments as a business expense
Under section one-sixty-two.
'In order to allow these deductions
Goes the argument of the Commissioner
The payments must be ordinary and necessary
To a business of the petitioner.
'Had Conway not repaid the investors
His career would have been under cloud,
Under the unique facts of this case
Held: The deductions are allowed.

Harold Jenkins and Conway Twitty
They are both the same
But one was born
The other achieved fame.
The man is talented
And has many a friend
They opened a restaurant
His name he did lend.
They are two different things
Making burgers and song
The business went sour
It didn't take long.
He repaid his friends
Why did he act
Was it business or friendship
Which is fact?
Business the court held
It's deductible they feel
We disagree with the answer
But let's not appeal.

Listed below are links to weblogs that reference Tax and Twitty Burgers: