Education Sector released a report this morning, College Rankings Reformed: The Case for a New Order in Higher Education:

The U.S. News rankings have become the nation's de facto higher education accountability system—evaluating colleges and universities on a common scale and creating strong incentives for institutions to do things that raise their ratings. But the U.S. News ranking system is deeply flawed. Instead of focusing on the fundamental issues of how well colleges and universities educate their students and how well they prepare them to be successful after college, the magazine's rankings are almost entirely a function of three factors: fame, wealth, and exclusivity. They directly or indirectly account for 95 percent of a school's ranking, as Table 1 reveals.... 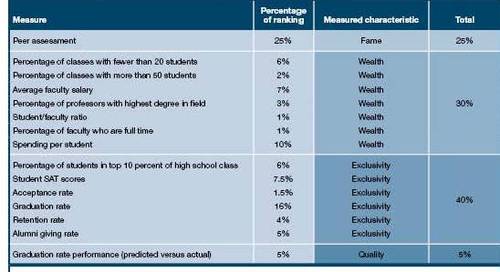 New research and advances in technology in the last several years have led to a host of new metrics and data sources that together offer an unprecedented opportunity to measure how well colleges and universities are preparing their undergraduate students. The new measures provide information about a range of important factors like teaching quality, student learning, graduation rates, and success after college. Many of them are eye-opening, suggesting that existing rankings badly mislead students and parents about the “best” colleges and universities. Some institutions currently mired in the lower reaches of the U.S. News rankings show outstanding results, while some of the exclusive institutions so prized by striving students don't live up to their reputations for excellence. The wealth of valuable new information provides the possibility of replacing existing college rankings with a vastly improved ranking system. This report explains what the new measures can show, how those measures can be combined into new college rankings, and why the new rankings would benefit both students and colleges. Today's Chronicle of Higher Education has an article about the new rankings, Researcher Proposes Basing College Rankings on Different Criteria, by Eric Hoover

I have myself questioned these rankings for precisely the same reasons you cited here. What about the quality of the teachers? What about student/faculty interactions? What about the critical thinking skills being instilled? There are just so many factors not presently being considered.

I hope the new educational system works better than the previous one.