Tax at the Emmy Awards 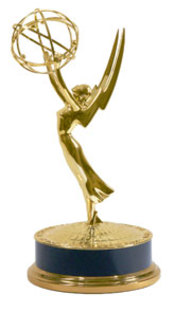 The IRS's new enforcement of the tax rules on Hollywood swag was a major topic of conversation at last night's Emmy awards:

Last night's most popular subject was the sumptuous gift bags given to Emmy presenters, valued at $30,000 or more, which the federal government now intends to tax as income.

Listed below are links to weblogs that reference Tax at the Emmy Awards:

» Here's something Jack Bauer can't fix in 24 hours from Don't Mess With Taxes
Jack Bauer is the man to call when the country is just 24 hours away from annihilation by ultimate bad guys (or gals; to my mind, no one has matched Nina Myers' first season of evil conniving). But Jack is definitely not the man to call for financial a... [Read More]