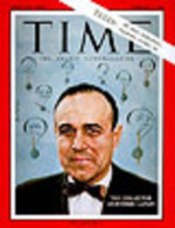 In a few hours at the Russell Senate Office Building, legal giant Mortimer Caplin will celebrate his 90th birthday. Senator Edward Kennedy, a former law student of Caplin’s at the University of Virginia Law School, is scheduled to speak, and Senators Grassley and Baucus are scheduled to attend.

Caplin is perhaps the most well-known IRS Commissioner in American history, serving from 1961 through 1964 during the Kennedy Administration and briefly into the Johnson White House. To give you an idea of his prominence, he graced the cover of Time magazine in 1962. At the time, it’s probably not a stretch to say taxes weighed on the American psyche more heavily than they do today — the top tax rate was 91%.

Listed below are links to weblogs that reference Happy 90th Birthday, Mortimer Caplin: