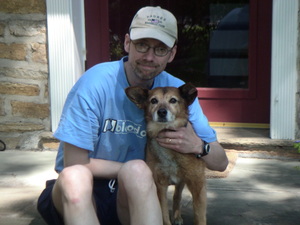 Over the weekend, we put down our wonderful family dog, Sandy.  Seven years ago, when our kids were in first and second grade, they pestered us to get a dog.  I researched various breeds and schlepped the family to several breeders trying to find the perfect dog for our family.  Then one Saturday we thought it would be fun to check out an ad in the local community newspaper.  We met Sandy -- an adult mutt from a shelter that a single mother and her young son could no longer keep because they were moving into an apartment that did not permit pets.  Although I had no intention of returning home with a dog that day, Sandy made a point of walking up to each of us to introduce herself and we were all smitten. She had had a hard life -- one of her ears had been partially bitten off and she was afraid of other dogs-- but something about her clicked with all of us.

Sandy soon became enmeshed in the daily rhythms of our family life.  She came with me when I coached my kids' sports teams, and the highlight of each practice and game was when I unleashed Sandy and the kids played "tag the dog" -- Sandy would race around the field dodging the kids as long as she could.  I can still hear the shrieks of joy from the kids and see the glow in Sandy's eyes.

As time passed and we all grew older, my coaching career ended and Sandy sat with me on the soccer sidelines for countless games through the years.  At her last game this season, she could no longer walk across the field and I had to carry her back to the car.

The morning Sandy died, my wife took her for a final walk to Starbucks. What was once a 5-minute walk took over a half an hour as Sandy slowly made her way.  Near our home, a little boy was mesmerized by Sandy, but his mother said he was too afraid of dogs to pet them.  As Sandy had done dozens of times through the years, she stood there placidly as the boy tentatively poked and prodded her, giving one final gift before she left us.

It has been three days since we put her down, and we are filled with grief, guilt and gratitude.  Grief because our home and our lives are emptier now without her.  Guilt because the decision to put her down was a difficult one, driven we fear more by our needs than hers (although she suffered with Cushing's disease,  became so incontinent that we kept her locked in the bathroom when we were away, and dropped nearly 40% of her body weight (from 40 to 25 pounds)).  Gratitude because she was everything one could want in a family dog.

I know it sounds hokey, but looking into Sandy's eyes and holding her as she slowly and peacefully died was one of the most moving experiences of my life.    Goodbye Sandy.

Listed below are links to weblogs that reference Goodbye Sandy:

» YOU NEVER GET OVER A GOOD DOG from Roth & Company, P.C.
A touching farewell to a pet by the TaxProf. I understand.... [Read More]

I know how painful this can be and got a lump in my throat when I read your post. It was two years ago this month that my 11 year old golden and best friend, Guinness, was unable to get up after gradually becoming more lethargic. A late night trip more than 50 miles to the closest emergency clinic revealed he had advance spleen cancer and would likely not make it through the night without major surgery, which would only extend his life for a few months. I considererd it, as the the MD Bar Exam was only a week away and having him with me would have made it much easier for me. In the end, however, I decided it wouldn't be fair to him and had to let him go - it was the toughest decision of my life.

I now have two newfies that I love very much, but will never take Guinness' place.

I have had to have two of our long time canine family members euthanised in the last two years. I know how heart wrenching it is, and how for months after (even now at times) I feel that pang of grief and nostalgia. Since then, I have adopted two other dogs, same breed as their predecesors, and I swear parts of them have been reincarnated. If/when you get your next friend, you will know what I mean. Feels like they are always around, still.

thank you for sharing. our pets are indeed our family, too.

I am grieving with and for you over the loss of your most precious friend. Dogs really show us that love is so much stronger than mere words, and stronger than death. She was well loved. They ask for no more.

Went this route two years ago with our
Golden Retriever, Cruise--felt like I had
been punched in the gut for the next two
weeks. Sincerest sympathies to you and
your family.

Nothing hokey about it. Having gone thru much the same experience a few years ago (our 14 year old "puppy" had to leave us), this brought tears of grief -- and joy -- to my eyes, as well.

Thank you for sharing this, and know that it does get better.

FWIW, after 2 years of constant nudging, my wife and daughters finally convinced me that it was time for another family member. I just *knew* that no dog could take Amber's place.

Thanks for sharing, Paul. What a lucky dog to have been loved so well.

We had to put down our Golden Retriever of 10 years in January. I understand your mixed feelings. But most of all I understand your grief. The only comment I can make is I know you will get through it. My post on Molly was on January 7 at http://drtaxsacto.blogspot.com/2006_01_01_drtaxsacto_archive.html.

Paul--You've written some great stuff on taxes and tax policy, but I believe that this posting is perhaps more meaningful than anything "professional" you have ever written. Thank you.