The Pacific Research Institute has released the Economic Freedom Index, modeled after the Index of Economic Freedom, published by The Brookings Institution and the Wall Street Journal, which ranks the 161 countries in the world by 50 variables in 10 categories (trade policy, fiscal burden of government, government intervention in the economy, monetary policy, capital flows and foreign investment, banking and finance, wages and prices, property rights, regulation, and informal market activity).  The new Economic Freedom Index ranks the 50 states by 143 variables in 5 categories (fiscal, regulatory, welfare spending, government size, and judicial). 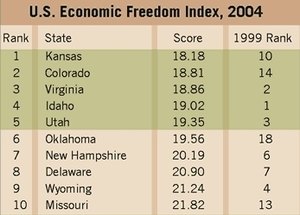 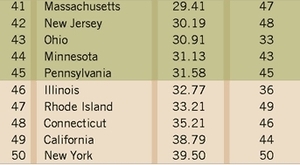 The Wall Street Journal has published an op-ed on the study by Lawrence J. McQuillan and Hovannes Abramyan of the Institute:  "Live Free or Move": Jobs Are Flocking to Low-Tax States for a Reason:

[T]he states that embraced supply-side tax cuts are not only financially more sound and enjoy stronger economies, but they are draining residents away from the states that opted for high taxes....In 2005, per capita personal income grew 31% faster in the 15 most economically free states than it did in the 15 states at the bottom of the list. And employment growth was a staggering 216% higher in the most free states.

Listed below are links to weblogs that reference 50-State Economic Freedom Ranking:

» Minnesota Near Bottom of Economic Freedom Index from Bogus Gold
From the Taxprof Blog: The Pacific Research Institute has released the [Read More]

» California: Next to Last in Economic Freedom from ProfessorBainbridge.com
The Pacific Research Institute's Economic Freedom Index ranks the 50 US states using five data sets to measure the extent to which the state respects the right of an individual to keep what he earns, produce what he wants, and [Read More]

The Index of Economic Freedom is jointly published by the WSJ and The Heritage Foundation, not the WSJ and the Brookings Institute.

I actually live in New York State and have had atleast 6 family member's leave the state, as well as countless friends and associates. People here are poor, and feel powerless, and have to have politicians give tax breaks to have some crappy megastore move in to hire a few hundred people. It's sad and pathetic and anyone who beleive's a Corporation(which is an individual entity) has no right to grow or choose it's own path obviously has never owned or operated one.

While looking through this study,

(http://www.pacificresearch.org/pub/sab/entrep/2004/econ_freedom/index.html) I wanted to find out how they researched and tabulated the information to come to their conclusions.

Under “Part 1. What is Economic Freedom?”, I found:

"In summary, our method uses the classical approach of using our judgment to compile a list of relevant indicator variables for economic freedom. These indicators are then converted into a number of indexes using various techniques."…” Our index is our best estimate of the state rankings. We have employed our judgment, and we do not claim it is perfect. We have at every junction made what we think is the right decision about what is free and what is not.”…

The saying of "judge, jury, and executioner" definitely comes to mind in relation to the biasness of this study.

Here's another interesting (although a couple years old) comparison of "Red" vs. "Blue" states.

I find it easy to believe that these economically "freer than others" states, for the majority, appear to be "red" states because those 10 states are on the aggregate, far less populated than the bottom 10.

Postulate this:
Do democrats advocate public spending because they generally live in cities( as recent election results suggest), where economically speaking, people are less "free"?

WOW! The WSJ and BI pay for a study that equates low taxes with freedom! That's news. Try measuring something meaningfull. Life span, overall health, wealth, and education level of the population, Infant mortality rate, or percent of population that lives below the poverty level. These mean much more to me than whether my tax bill is $1000 more here than there. I know South Carolina and any list that ranks that place high is slightly suspect in my mind. Any coincedence that many of the top ten are underpopulated overrepresented states that get more in federal tax dollars than what they contribute?

Of course, the potential errors in the Wall Street Journal's assessment is that having higher "growth" is an indication that those top 10 states are better off already then the bottom 10 states. However, this intuitively seems faulty considering the fact that even though California is listed as the second to last "least free state" on this list, it has, by far, the largest most robust (and "stable") economy in all of the US, closely followed by "the least free state."

I just wanted everyone to know there are two of these rankings for state economic freedom. The general concensus is that this one is far worse (my state WV, for example, gets a good score for judicial because we adopted reform, but the point is our judicial is the absolute worst in nation, which isn't reflected). The other index, which is part of the world freedom index project can be found at www.freetheworld.com and it is cited much more often in published articles. Both are good, but the other one seems to be more accurate in empirical research.

"In 2005, per capita personal income grew 31% faster in the 15 most economically free states than it did in the 15 states at the bottom of the list. And employment growth was a staggering 216% higher in the most free states."

Well, when you're dealing with the growth rates for states that are less developed of course the rate is higher. Having some measure of propsperity grow from 1 to 2 is 100% growth, from 10 to 12 is only 20%--but the second one actually grew more and is more prosperous.

Corporations have never been so willing to flock to a red state. Cheap labor and low taxes make them the perfect place for starting off.

Imagine my home state of Illinois in the bottom 5! Thats why we need to vote out Blagojevich!